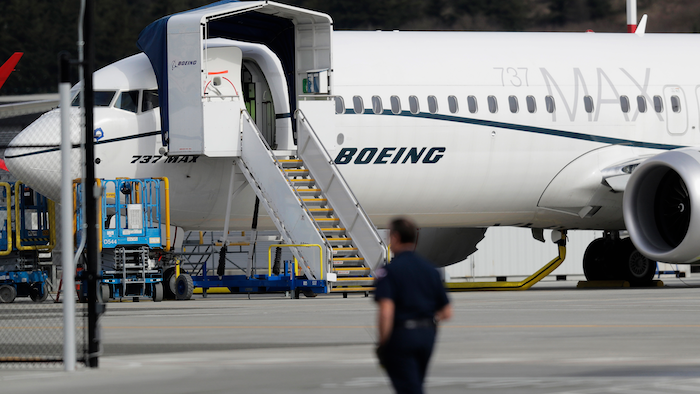 In this March 14, 2019, file photo, a worker walks next to a Boeing 737 MAX 8 airplane parked at Boeing Field in Seattle.
AP Photo/Ted S. Warren, File

Boeing was expected to complete the work last week, but FAA spokesman Greg Martin said the company needs more time to make sure it has identified and addressed all issues.

Chicago-based Boeing offered the same timetable as it works to convince regulators that it can fix software on the planes.

"Safety is our first priority, and we will take a thorough and methodical approach to the development and testing of the update to ensure we take the time to get it right," said Boeing spokesman Charles Bickers.

Boeing needs approval not just from FAA, but elsewhere, including Europe and China, where safety officials have indicated they will conduct their own reviews.

The planes have been grounded around the world since mid-March.

The news from the FAA suggests that airlines could be forced to park their Max jets longer than they expected. Airlines that own Max jets are scrambling other planes to fill some Max flights while canceling others.

"We are aware that the resumption of service for our 737 Max aircraft may be further delayed, and our team will work with all customers impacted by any flight cancellations," said American Airlines spokesman Ross Feinstein.

American Airlines had been pointing toward a late-April return of its 24 Max 8s. Over the weekend, Southwest Airlines announced that its 34 Max 8s will be removed from the schedule through May instead of mid-April. United Airlines has idled its 14 Max 9s through June 5.

Separately, U.S. regulators and Boeing are awaiting a preliminary report from Ethiopian investigators into the March 10 crash of an Ethiopian Airlines Max 8 jet shortly after takeoff from Addis Ababa. The report will be scrutinized for information from the plane's data recorders that might suggest similarities between the doomed flight and the Oct. 29 crash of a Lion Air Max 8 into the Java Sea off Indonesia. The two crashes killed 346 people.

Data from the Indonesian plane indicates that pilots unsuccessfully fought the automated anti-stall system for control of the plane, which plunged into the sea shortly after takeoff. According to published reports, the same system activated on the Ethiopian Airlines flight.

Boeing is making changes in an automated system that is designed to prevent the plane's nose from rising, which can lead to a dangerous aerodynamic stall. The changes include relying on readings from more than one sensor before the anti-stall system activates and pushes the nose down, and making the system's actions less severe and easier for pilots to handle. Boeing has said it will pay to train pilots on the technology.

Two American Airlines pilots who attended a session with Boeing experts last week expressed satisfaction with the manufacturer's changes. American's chief 737 pilot, Roddy Guthrie, said Boeing added "some checks and balances in the system that will make the system much better."

Congress, meanwhile, is looking into the relationship between Boeing and the FAA. The House Transportation and Infrastructure Committee said Monday that it had requested records from both Boeing and the FAA related to the certification of the 737 Max.

The technology is used by blue chip companies to deliver mission-critical end-use parts on-demand and at the point of need.
Jul 13th, 2021
Follow Us
Most Recent