NASA may switch to commercial rockets to keep the launch date. 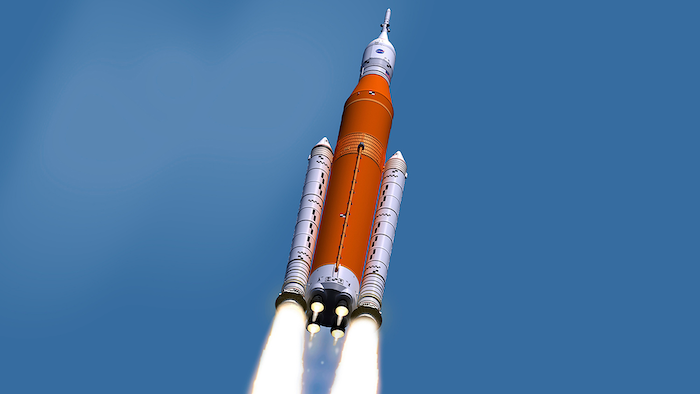 This illustration made available by NASA shows the Space Launch System during liftoff. On Wednesday, March 13, 2019, NASA's top official said the space agency's new rocket won't be ready for a moon shot next year.
Marshall Space Flight Center/NASA via AP

Bridenstine told a Senate committee that two private rockets would be needed, one to launch the Orion crew capsule and its European-built service module, the other to launch an upper stage. Orion would have to dock with the upper stage in orbit around Earth, before heading to the moon.

NASA's SLS, or Space Launch System, rocket, could do everything in one fell swoop. That's why it's "a critical piece of what NASA needs to build," Bridenstine told the Senate Commerce, Science and Transportation Committee.

At present, Orion does not have the capability to dock with anything in orbit. That outfitting would have to be completed between now and next year, Bridenstine noted.

"This is 2019," Sen. Roger Wicker, R-Mississippi, the committee chairman, reminded Bridenstine. Wicker added: "I'd sure like to keep us on schedule."

Bridenstine noted this option might require more money from Congress.

NASA is pushing for a sustainable moon program this time around, as opposed to the come-and-go Apollo lunar landings a half-century ago. The goal is to have an outpost with astronauts near the moon to serve as a stepping-off point for lunar landings.

This first mission coming up — essentially a three-week test flight — would carry no crew and would not land. Rather, the Orion would come close to the lunar surface before taking a big lap around the moon.

Bridenstine said NASA will decide in the next couple weeks whether to stick with its rocket and delay — or go commercial for this one test flight. If private rockets are used — and Bridenstine did not list preferences or mention any by name — the SLS would make its launch debut for NASA's second exploration mission by 2023. That mission which would carry astronauts around the moon.

This first test flight originally was scheduled for this year.

"I want to be clear: NASA has a history of not meeting launch dates, and I'm trying to change that," Bridenstine said.

Just last week, SpaceX successfully completed the first test flight of its new Dragon capsule designed for astronauts. It could begin flying crews to the station from Florida this summer.