Boeing's Power Has Its Limits

This week has shown that the company's clout goes only so far. 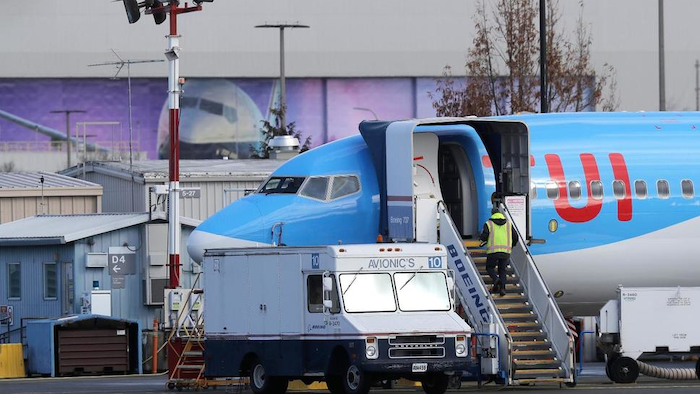 A worker walks up steps to the right of an avionics truck parked next to a Boeing 737 MAX 8 airplane being built for TUI Group at Boeing Co.'s Renton Assembly Plant Wednesday, March 13, 2019, in Renton, Wash. President Donald Trump says the U.S. is issuing an emergency order grounding all Boeing 737 Max 8 and Max 9 aircraft in the wake of a crash of an Ethiopian Airliner.
AP Photo/Ted S. Warren

WASHINGTON (AP) — Aerospace giant Boeing is a juggernaut in Washington, employing a team of in-house lobbyists and blue chip firms as part of a multimillion dollar influence operation built to shape policy on Capitol Hill and inside the Trump administration.

But the company's clout goes only so far.

Bowing to international pressure, President Donald Trump announced Wednesday that Boeing 737 Max 8 and Max 9 aircraft in the U.S. were being grounded following the Ethiopian Airlines disaster and another crash involving the same model jet five months earlier in Indonesia. Many nations in the world had already barred the aircraft from their airspace.

Trump said he didn't want to take any chances, even though the Federal Aviation Administration had said it didn't have any data to show the passenger jets are unsafe.

Still, Trump gave Boeing a vote of confidence, declaring it "a great, great company with a track record that is so phenomenal."

The crash in Ethiopia had cast a spotlight on the FAA's decision to continue to permit the airliner to fly even as other countries grounded it — and onto Trump's ties to Boeing and the company's influence in Washington.

The president spoke by phone with Boeing's CEO Dennis Muilenburg, a frequent participant in White House events, on Tuesday. The FAA said the same day it remained confident in the aircraft even as governments in Europe and Asia grounded the plane.

Muilenburg urged Trump not to ground the fleet, according to a White House official not authorized to publicly discuss a private conversation. It was not clear whether the call influenced the FAA's decision.

Trump has long showcased American business abroad on his international trips and last month, mere hours before he was set to meet with North Korea's Kim Jong Un in Hanoi, he touted a sale of 100 of the 737 Max planes to Vietnamese airlines.

Boeing said the order was worth $12.7 billion but, in the wake of the crashes, the Vietnamese government said the safety issues must be addressed for the planes to go into service.

Trump also used Boeing as a backdrop of an early rally, standing in front of a new Boeing 787-10 Dreamliner at a South Carolina plant in February 2017. Boeing employs more than 153,000 people, including more than 7,300 in South Carolina.

"We want products made by our workers in our factories stamped with those four magnificent words — 'made in the USA'," Trump said.

But his relationship with Boeing has been, at times, rocky. He clashed with the company before even taking office, slamming Boeing for the cost of its plan to build new versions of Air Force One, a broadside that sent the company's shares tumbling.

Boeing spent $15.1 million on lobbying in 2018, with more than a dozen firms working on its behalf, according to disclosure records filed with the House and Senate. Among them are Norm Dicks and Associates. Dicks was serving as the top Democrat on the House Appropriations Committee when he ended his 36-year congressional career in 2013.

Boeing paid Dicks' firm $290,000. He most recently lobbied lawmakers to support Boeing's KC-46A tanker, an aircraft that acts as a flying gas station and can refuel all U.S. and allied aircraft. Boeing has a contract with the Air Force for 52 of an expected 179 tankers.

The executive in charge of Boeing's government operations office is Timothy Keating, who worked in the Clinton White House as special assistant to the president and staff director for legislative affairs. Before joining Boeing, Keating was a senior vice president at Honeywell International and a managing partner at the lobbying firm Timmons and Company.

Boeing's connections in the nation's capital extend beyond the people on its payroll. When a Senate oversight committee convenes a hearing on aviation safety following the Ethiopian Airlines crash, John Keast, the Republican-led panel's staff director, won't be far from the dais where the members are sitting. Keast was a Boeing lobbyist just before he accepted the committee post late last year.

No date has been set for the hearing, although Wicker signaled that the committee would not interfere with the FAA and National Transportation Safety Board investigations of the Ethiopian Airlines disaster.

Boeing also makes its presence felt through campaign contributions made by a political action committee and individual employees to lawmakers from both political parties. Boeing-affiliated groups and employees have donated close to $8.4 million since 2016, according to the political-money website Open Secrets.

Among the recipients is Sen. Ted Cruz, R-Texas, chairman of the Senate's aviation and space subcommittee, who received more than $60,000. Cruz on Tuesday joined a number of other lawmakers who called for the Max 8 aircraft to be grounded, declaring such a move would be prudent "until the FAA confirms the safety of these aircraft and their passengers."