Looking Back on the Concorde at 50

Although the plane went out of service in 2003, its delta-wing design and drooping nose still make it instantly recognizable even to people who have never seen one in person. 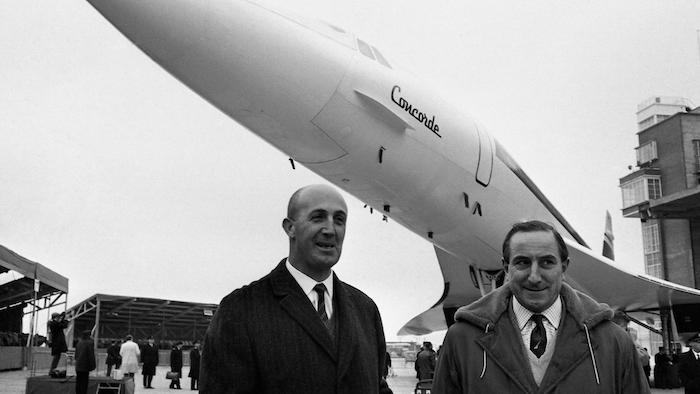 In this Dec. 11, 1967, file photo, test pilots Andre Turcat and Brian Trubshaw stand in front of the prototype of the jet during its roll out ceremony in Toulouse.
AP Photo/Peter Kemp, File

The speed and elegant appearance of the Concorde inspired awe. Its ear-rattling sonic booms irritated people on the ground and led to restrictions on where the jet could fly.

The Concorde's maiden flight was 50 years ago this month. Although the plane went out of service in 2003, its delta-wing design and drooping nose still make it instantly recognizable even to people who have never seen one in person.

The Concorde was the world's first supersonic passenger plane. It was a technological marvel and a source of pride in Britain and France, whose aerospace companies joined forces to produce the plane.

With four jet engines and afterburners, the plane could fly at twice the speed of sound and cruised at close to 60,000 feet, far above other airliners. It promised to revolutionize long-distance travel by cutting flying time from the U.S. East Coast to Europe from eight hours to three and a half hours.

Depending on the layout, the plane could seat up to 128 passengers, far fewer than on many other planes flying the trans-Atlantic routes. The relative scarcity of seats and the plane's high operating costs made tickets expensive — typically several thousand dollars — so it was mostly reserved for the wealthy and famous, occasionally royalty.

In the U.S., the plane flew mainly to New York and Washington and attracted quite a buzz. In the mid-1980s, men dressed as Union and Confederate soldiers to re-enact a Civil War battle in Virginia paused in mid-skirmish to gaze up at a Concorde flying into nearby Dulles Airport.

A Concorde captain raved that the plane flew beautifully, and that the only indication of its speed came from looking down at other jets far below that seemed as if they were flying backward — the Concorde was moving about 800 mph faster.

Jamie Baker, an airline analyst and aviation enthusiast, took the plane from New York to London in 2002. Perhaps because it was a morning flight, the mood was more dignified than festive, Baker says. The ride was so smooth that there was hardly any sensation of flight.

"No turbulence. No sense of motion, save for the clouds passing by below us," Baker says. "Concorde was a tool devised to outwit time."

Former Boeing engineer Peter Lemme recalls his 1998 flight as a delight, but cramped.

"The seats were more like what we flew domestically in coach," he says. "The food was excessive," including caviar, and there was a duty-free cart piled with very expensive items.

However, the Concorde never caught on widely. The plane's economics were challenging, and its sonic booms led it to be banned on many overland routes. Only 20 were built; 14 of which were used for passenger service.

As time went on, flights were disrupted by mechanical breakdowns including engine failures and a broken rudder. Reviewers complained about the small cabin, noise, and vibrations that started during takeoff and continued once airborne.

The plane's darkest day came on July 25, 2000, when an Air France Concorde crashed into a hotel and exploded shortly after takeoff in Paris, killing all 109 people on board and four on the ground.

Investigators determined that the plane ran over a metal strip that had fallen off another jet on to the runway, damaging a tire. A piece of the tire crashed into the underside of the wing, shockwaves caused a fuel tank to rupture, and the fuel ignited.

The planes were grounded for expensive modifications. After 18 months, BA and Air France both resumed flights, but traffic never recovered.

It was determined that a more intensive and expensive maintenance schedule would be required to keep the fleet flying. In 2003, BA and Air France both stopped Concorde service.

BA's chief executive called it "the end of a fantastic era in world aviation," but added that retiring the planes was a prudent business decision.

Supersonic transports could yet make a comeback. Several companies are working on models and hope to test them soon.