The trials in Reno were conducted under a federal program to fast-track regulatory approval for UAVs nationwide. 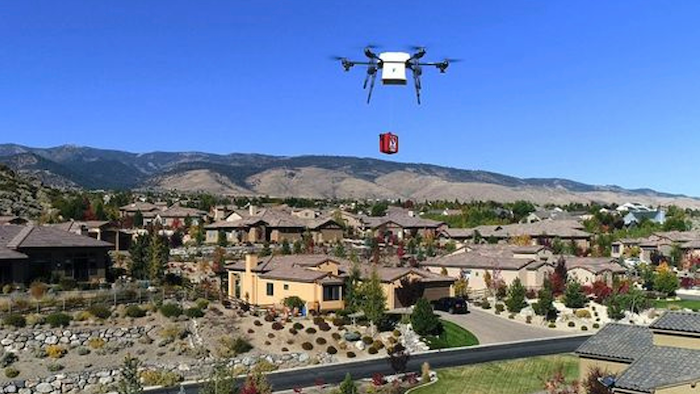 In this Oct. 2017 photo, a Flirtey delivery drone demonstrates the delivery of a defibrillator for cardiac arrest patients in Reno.
Flirtey via AP

The city of Reno confirmed the first successful deliveries by multiple drones steered by a single operator under a federal program fast-tracking regulatory approval for unmanned aerial vehicles nationwide.

City officials announced Wednesday that Flirtey recently simulated the delivery of automated external defibrillators for cardiac arrest patients under the watch of the Federal Aviation Administration in conjunction with the administration's Drone Integration Pilot Program.

The 3-year program is intended to accelerate the safe integration of unmanned aerial vehicles into national airspace.

Flirtey CEO Matt Sweeney called it a "major milestone" that puts the company on track to gain approval to start sending consumer products by air across the country by 2020 — including FedEx packages as well as medical and equipment and supplies.

"Flirtey's drone delivery service has the potential to save more than 100,000 lives per year and more than 1 million American lives over each decade to come," he said.

Reno is one of 10 governments nationally selected for the program. The city is partnering with Flirtey initially to deliver external defibrillators to cardiac arrest patients

"Public safety is our top priority and the use of drones to provide life-saving ED technology to cardiac patients would reduce the number of deaths from cardiac arrest in northern Nevada," Reno Mayor Hillary Schieve said Wednesday.

The delivery was conducted by Flirtey's new-generation drone specifically designed to carry heavier payloads longer distances. It will allow Flirtey to deliver medicine and commercial packages quickly and more efficiency, the company said.

Flirtey joined forces last year with the city and partners such as AirMap and Regional Emergency Medical Services Authority to apply for fast-track designation under the FAA and Department of Transportation's federal drone testing initiative. The selection allowed Flirtey to receive a waiver from the federal government to do the multi-drone test.

Sweeney told the Reno Gazette Journal the test is an important achievement because it shows that drone delivery can be expanded safely. He said the goal is to start offering delivery by drone in Reno and expand it across the country.

"One of the key milestones that we needed to achieve to allow us to scale the program is to have one Flirtey pilot operate multiple drones at the same time," Sweeney said.

The life-saving uses also can include disaster relief.

"Once we have this drone infrastructure in place, we can work with our partners to deliver water, food and medicine to people who need it when you have a natural disaster and roads are down," Sweeney said.