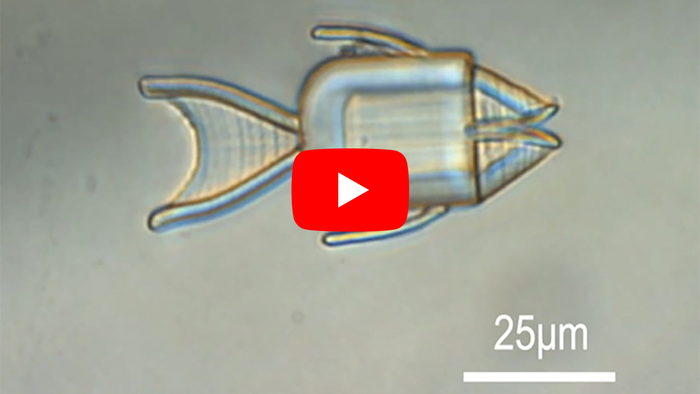 Fish-shaped microrobots are guided with magnets to cancer cells, where they open their mouths to release their chemotherapy cargo.
American Chemical Society

Chemotherapy successfully treats many forms of cancer, but the side effects can wreak havoc on the rest of the body. Delivering drugs directly to cancer cells could help reduce these unpleasant symptoms. Now, in a proof-of-concept study, researchers reporting in ACS Nano made fish-shaped microrobots that are guided with magnets to cancer cells, where a pH change triggers them to open their mouths and release their chemotherapy cargo.

Scientists have previously made microscale (smaller than 100 µm) robots that can manipulate tiny objects, but most can’t change their shapes to perform complex tasks, such as releasing drugs.

Some groups have made 4D-printed objects (3D-printed devices that change shape in response to certain stimuli), but they typically perform only simple actions, and their motion can’t be controlled remotely.

In a step toward biomedical applications for these devices, Jiawen Li, Li Zhang, Dong Wu and colleagues wanted to develop shape-morphing microrobots that could be guided by magnets to specific sites to deliver treatments. Because tumors exist in acidic microenvironments, the team decided to make the microrobots change shape in response to lowered pH.

So the researchers 4D printed microrobots in the shape of a crab, butterfly or fish using a pH-responsive hydrogel. By adjusting the printing density at certain areas of the shape, such as the edges of the crab’s claws or the butterfly’s wings, the team encoded pH-responsive shape morphing. Then, they made the microrobots magnetic by placing them in a suspension of iron oxide nanoparticles.

The researchers demonstrated various capabilities of the microrobots in several tests. For example, a fish-shaped microrobot had an adjustable “mouth” that opened and closed. The team showed that they could steer the fish through simulated blood vessels to reach cancer cells at a specific region of a petri dish.

When they lowered the pH of the surrounding solution, the fish opened its mouth to release a chemotherapy drug, which killed nearby cells. Although this study is a promising proof of concept, the microrobots need to be made even smaller to navigate actual blood vessels, and a suitable imaging method needs to be identified to track their movements in the body, the researchers say.

The authors acknowledge funding from the National Natural Science Foundation of China, the National Key R&D Program of China, Major Scientific and Technological Projects in Anhui Province, the Fundamental Research Funds for the Central Universities, the Youth Innovation Promotion Association of the Chinese Academy of Sciences, the Hong Kong Research Grants Council, CAS-Croucher Funding Scheme for Joint Laboratories, the Hong Kong Special Administrative Region of the People’s Republic of China Innovation and Technology Commission and the Multi-scale Medical Robotics Center.

The abstract that accompanies this article is available here.