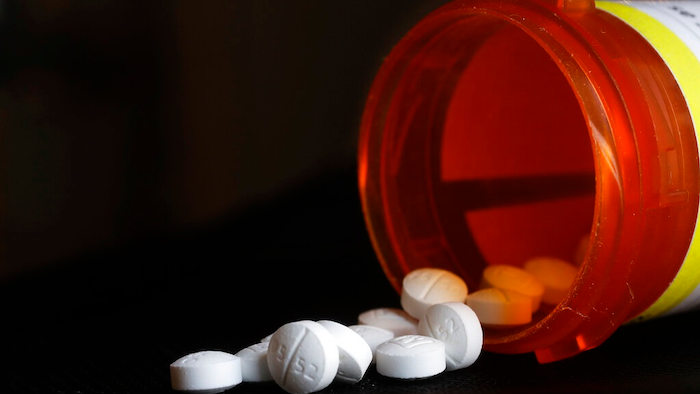 This photo shows an arrangement of Oxycodone pills in New York on Aug. 29, 2018. The Oklahoma Supreme Court has overturned a $465 million opioid ruling against drugmaker Johnson & Johnson, finding that a lower court wrongly interpreted the state's public nuisance law. The court ruled in a 5-1 decision Tuesday, Nov. 9, 2021, that the district court in 2019 was wrong to find that New Jersey-based J&J and its Belgium-based subsidiary Janssen Pharmaceuticals violated the state's public nuisance statute.
AP Photo/Mark Lennihan, File

OKLAHOMA CITY (AP) — The Oklahoma Supreme Court on Tuesday overturned a $465 million opioid ruling against drugmaker Johnson & Johnson, finding that a lower court wrongly interpreted the state's public nuisance law in the first case of its kind in the U.S. to go to trial.

The ruling was the second blow this month to a government case that used a similar approach to try to hold drugmakers responsible for the national epidemic of opioid abuse. Public nuisance claims are at the heart of some 3,000 lawsuits brought by state and local governments against drugmakers, distribution companies and pharmacies, but it's not clear that the legal theory is in trouble with so many more cases queued up to test it.

The court ruled in a 5-1 decision that District Judge Thad Balkman in 2019 was wrong to find that New Jersey-based J&J and its Belgium-based subsidiary Janssen Pharmaceuticals violated the state’s public nuisance statute.

“The court has allowed public nuisance claims to address discrete, localized problems, not policy problems,” according to the opinion written by Justice James R. Winchester.

“J&J had no control of its products through the multiple levels of distribution, including after it sold the opioids to distributors and wholesalers, which were then disbursed to pharmacies, hospitals, and physicians’ offices, and then prescribed by doctors to patients.” The ruling also said the company had no control over how patients then used the products.

The high court said that although it wouldn't want to downplay the suffering that thousands of Oklahomans have gone through because of opioids, the question was whether the company’s marketing and sale of opioids created a public nuisance.

“J&J no longer promotes any prescription opioids and has not done so for several years,” since 2015, Winchester wrote. “Even with J&J’s marketing practices these ... medications amounted to less than 1% of all Oklahoma opioid prescriptions.”

State statistics show that from 2007 to 2017, more than 4,600 people in Oklahoma died from overdoses from opioids of all kinds, including prescription painkillers and illicit versions such as heroin and illegally made fentanyl. Nationally, opioids have been linked to more than 500,000 deaths since 2000.

The court also rejected the state’s appeal to increase the damages award. The state was planning to use the $465 million to fight the opioid crisis, but said that wasn't nearly enough to pay for the harm it has done.

The ruling comes a week after a California judge issued a tentative ruling that said local governments had not proven that Johnson & Johnson and other drugmakers used deceptive marketing to inflate prescriptions of their painkillers, leading to a public nuisance.

Although the Oklahoma lawsuit filed by former state Attorney General Mike Hunter was the first of thousands of similar lawsuits to go to trial, the state Supreme Court's ruling doesn't necessarily spell doom for the others.

Elizabeth Burch, a University of Georgia School of Law professor who is following the opioid litigation, said other judges and juries might not decide their cases the same way.

“The question is still whether these are outliers,” she said. “I don’t think we have enough of a consensus on public nuisance law and where it goes and how it works.”

Carl Tobias, a professor at the University of Richmond School of Law, noted that state public nuisance laws vary and that the California ruling could be altered by a higher court.

“Nuisance law varies from state to state, especially in this context because it’s so cutting edge,” he said. "We haven’t seen enough cases to sort this out and say whether it’s going to be a viable theory or not.

The Oklahoma case was the first of its kind to go to trial, and the one in California is the only other one where a verdict was issued, as most cases have been settled before or during trials. But other opioid trials rooted in public nuisance law are happening before juries in a federal court in Cleveland and a state court in New York. And a ruling is expected soon in a trial before a judge in West Virginia.

Oklahoma's current attorney general, John O'Connor, said he was disappointed by the ruling that overturned a “huge victory” for those suffering from opioid abuse.

“Our staff will be exploring options,” O'Connor said in a statement. “We are still pursuing our other pending claims against opioid distributors who have flooded our communities with these highly addictive drugs for decades.”

The state has also filed lawsuit against three companies that distribute opioids.

Johnson & Johnson said in a statement that the ruling appropriately overturned a “misguided and unprecedented” attempt to expand public nuisance laws.

“We recognize the opioid crisis is a tremendously complex public health issue, and we have deep sympathy for everyone affected,” the drugmaker said. “The Company’s actions relating to the marketing and promotion of these important prescription pain medications were appropriate and responsible.”

Earlier this year, Johnson & Johnson agreed to pay $5 billion to settle similar lawsuits across the U.S. In a related deal, the nation's three largest drug distribution companies also agreed to a $21 billion settlement over time. It's up to the companies to decide whether to move ahead as they see how many government entities join. The companies all found that enough states joined for them to survey local governments.

Burch said that the new rulings in California and Oklahoma might prompt some governments that were on the fence to join rather than risk losing on their claims in court.

In dissent, Justice James E. Edmondson said he would uphold the verdict but send the case back to district court to recalculate the damages award.

The state had asked that the award be increased to $9.3 billion.