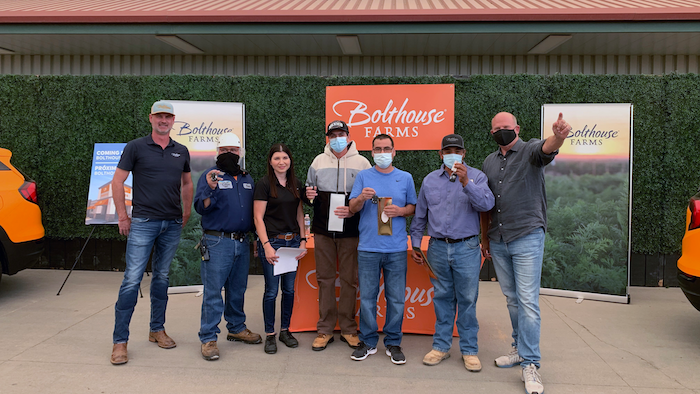 BAKERSFIELD, Calif., Oct. 7, 2021 – Bolthouse Farms recognized and honored more than 100 top performing Frontline employees during their second annual “People Day” held Friday, September 24, 2021, at the Bakersfield, Calf. facility. These essential employees have continued to go above and beyond during this unprecedented year to help grow the business, keep it running smoothly and allow the company to fulfil their goal of feeding and nourishing people throughout North America.

“People Day” helps to further the company’s ambition to be a  premier employer in all locations they operate by promoting a safe, innovative, productive, and positive work environment, and recognizing employees who have been ranked as high performers for the past fiscal year. During the event, a total of 25 top performing Frontline employees from five distinct workgroups across the company were awarded one of five Carrot Orange 2021 GMC® Terrain vehicles or one of four sets of cash bonuses in the amounts of $10,000, $7,500, $5,000, or $2,500. An additional 81 recipients received a bonus of $1,000 the day before. Awards were given to employees from its Bakersfield, Calif., Hodgkins, Ill., Prosser, Wash. and Tolleson, Ariz. Facilities.

“I am proud to recognize these employees who truly live and breathe Bolthouse Farms company culture – People Powering Purpose – each and every day,” said Zak Karlen, General Manager, Farms. “Celebrating our people is key to our culture, where we put people first. Congratulations to each of the top performers recognized, as they are the ones who make a difference by going above and beyond with their commitment, leadership and performance every day.”

“This is my favorite day of the year – when we get to celebrate the successful year we had and to thank each and every one of our employees for helping to make Bolthouse Farms the company we all know we can,” added Bolthouse Farms CEO Jeff Dunn.

Top performers were nominated by their supervisors, using criteria including skill assessments, key performance indicators specific to their job, safety and attendance, as well as demonstrating living Bolthouse Farmscompany culture and values. Employees from each workgroup were presented to the senior leadership team who evaluated the employees’ performance for award selection.

“Since 1988, I have been part of the Bolthouse Farms family – I come to work, do my job and do a good job,” said Raul Pena, Foreman of the Irrigation Team at the company’s farm in Cuyama, Calif. and recipient of one of the vehicles. “Being recognized during People Day this year and receiving one of the new vehicles, I truly felt that my hard work is recognized, appreciated and noticed by our leaders.”

For more than a century, Bolthouse Farms has been known as the innovation leader in growing and distributing carrots and high-quality, innovative branded products. Employing more than 2,200 people and headquartered in Bakersfield in California’s fertile San Joaquin Valley, Bolthouse Farms is one of the largest carrot growers and distributors in the U.S. Guided by its purpose – Plants Powering People™ – the company recently introduced its new Bolthouse Farms Wunderoots™ line of fresh carrot innovations including carrot dogs, and also produces and sells super-premium juices, smoothies, café beverages, protein shakes, functional beverages and premium refrigerated dressings, all under the Bolthouse Farms® brand name. Visit Bolthouse Farms or follow us on Instagram, Facebook and Twitter.