Lawsuit: Ida Outages Due to 'Gum and Super Glue' at Utility

About 902,000 customers lost power after the hurricane. 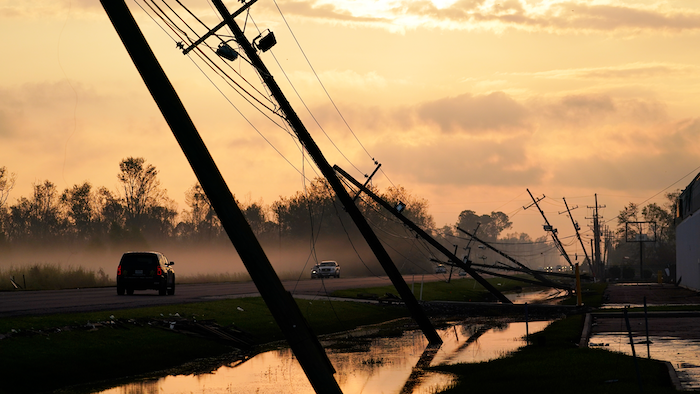 The suit was filed Saturday against Entergy Corp. and its subsidiaries Entergy Louisiana and Entergy New Orleans. Entergy has said about 902,000 customers lost power after the major hurricane made landfall on Aug. 29.

Entergy's website indicated that about 22,200 users were without power Monday, nearly 11,500 of them in Lafourche Parish, which Ida hit with sustained winds of up to 150 mph (240 kph).

Entergy does not comment on pending litigation, corporate spokesman Neal Kirby said in an email Monday.

The suit seeks to represent everyone who lost power, and Judge Rachel Johnson will decide whether to certify it as a class action claim.

“Before Hurricane Ida hit Southeast Louisiana, it was Entergy’s position that its systems which provided power to 1.1 million residents and businesses, could withstand winds of 150 mph" but a number of studies had indicated otherwise, the lawsuit said.

Although climate change is bringing more frequent and intense hurricanes, it added that “grossly inadequate maintenance and inspection,” antiquated equipment, and shoddy maintenance “created a system that could not and would not sustain even a hurricane with wind gusts below 100 miles per hour” (160 kilometers per hour).

That included peak gusts of 90 mph (145 kph) in New Orleans and at its international airport in suburban Kenner, the lawsuit said.

Underground cables would have protected power transmission in southeast Louisiana, the lawsuit said. “Instead, Entergy chose the bubble gum and super glue approach to protect their billions of dollars instead of their customers,” it said.

In the New Orleans area, the eight transmission lines bringing power to more than 900,000 people failed during Ida, despite storm damage less severe than that wreaked by Ida further to the south and west in Louisiana.

With power out to 84 sewer lift stations, the Sewerage and Water Board of New Orleans “was forced to pump raw sewage into the Mississippi River. This continued through September 6, 2021,” the lawsuit said.

The named plaintiffs include 14 people and three companies in Orleans, Jefferson, Plaquemines and St. John the Baptist parishes.

“Ironically, Entergy is seeking to charge customers to cover $2.4 billion in power restoration costs for 2020 storms that affected Louisiana, including Hurricanes Laura, Delta, and Zeta,” the lawsuit said. “No one yet knows what Entergy will charge its customers for its costs resulting from its failure to properly harden and maintain its systems following Hurricane Ida.”

For American companies of all sizes, exporting to international buyers makes more sense now than ever before. The new, "Basic Guide to Exporting" addresses virtually every issue an exporter might face.
Oct 7th, 2021