Two engineers were among the victims. 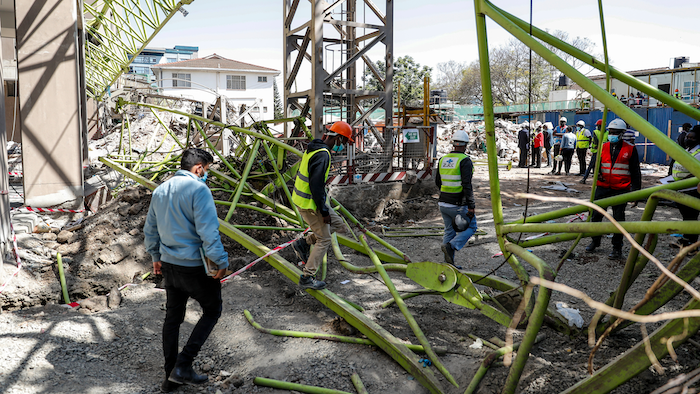 Construction workers observe the wreckage after a crane collapsed at a construction project to build a 14-storey student hostel in Nairobi, Kenya Thursday, Aug. 26, 2021. Police in Kenya's capital say nine people are dead, including two Chinese engineers, after the crane collapsed at the site being supervised by a Chinese construction firm.
AP Photo/Brian Inganga

NAIROBI, Kenya (AP) — Police in Kenya’s capital say nine people are dead after a crane collapsed at a high-rise construction site in Nairobi.

Officer Muturi Mbogo said the crane collapsed midday Thursday while it was being dismantled by workers. He said another worker was seriously injured. He said the collapse is under investigation.

A worker at the site, Michael Odhiambo, said the crane fell after its work was completed on the 14th floor. “It seems they did not realize the nuts tying it were loose,” he said of fellow workers. “We heard a loud bang, only to realize the crane was down.”

Two Chinese engineers were among the victims, Odhiambo said. The project to build a 14-story student hostel is being supervised by a Chinese construction firm.

The Zhejiang Chengjian Construction Africa Ltd said in a statement that it has sealed off the site and is cooperating with police and other authorities.

Join Industrial Media's David Mantey and E-Commerce Evangelist for Manufacturers, Author, Curt Anderson as we explore the impact and opportunity e-commerce brings to US manufacturing. When? Wednesday, November 10th, 11:00 AM CST
Oct 11th, 2021