The pilot landed successfully, not knowing his plane was nearly ripped in half. 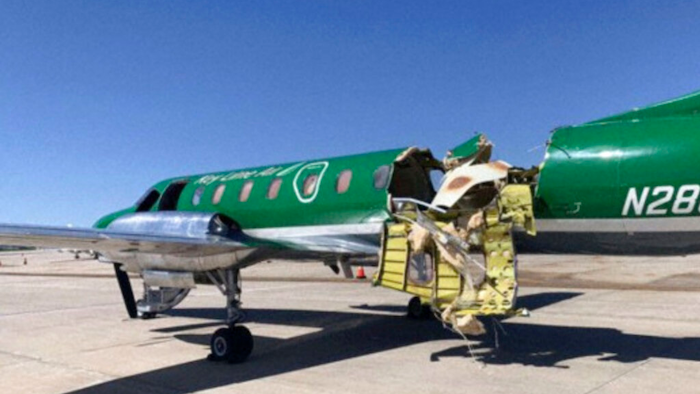 This image from CBS Denver shows a Key Lime Air Metroliner that landed safely at Centennial Airport after a mid-air collision near Denver on Wednesday, May 12, 2021. Federal officials say two airplanes collided but that there are no injuries. The collision between a twin-engine Fairchild Metroliner and a single-engine Cirrus SR22 happened as both planes were landing, according to the National Transportation Safety Board. Key Lime Air, which owns the Metroliner, says its aircraft sustained substantial damage to the tail section but that the pilot was able to land safely.
CBS Denver via AP

DENVER (AP) — The pilot of an airplane that collided with another midair near Denver requested an emergency landing for engine failure, not knowing that his plane was nearly ripped in half, according to air traffic control audio. Miraculously, both planes landed and no one was hurt, officials said.

The planes were getting ready to land at a small regional airport in a Denver suburb Wednesday when they collided, according to the National Transportation Safety Board and South Metro Fire Rescue.

The pilot who requested the emergency landing was the only person aboard a twin-engine Fairchild Metroliner that landed at Centennial Airport despite major damage to its tail section. The plane is owned by a Colorado-based Key Lime Air, which operates cargo aircraft.

“Looks like the right engine failed, so I’m gonna continue my landing here,” the pilot said in an audio clip with air traffic control.

Experts say the positive outcome of the collision was a combination of luck and advanced life-saving technology.

“It’s very rare for me to be able to say ‘midair’ and ‘no fatalities’ in the same sentence,” said Joseph LoRusso, a Broomfield, Colorado-based aviation attorney and commercially rated pilot.

The damage to the Metroliner's rear fuselage was in the “perfect location,” said Anthony Brickhouse, an associate professor of aerospace and occupational safety at the Daytona Beach, Florida campus of Embry-Riddle Aeronautical University.

The second plane, a single-engine 2016 Cirrus SR22, was rented by Independence Aviation, the company said in a statement. Its pilot successfully deployed the Cirrus Airframe Parachute System designed to slow the craft’s descent after a collision.

The pilot-deployed parachute “did exactly what it is supposed to do” which is to “allow the aircraft to crash in a controlled manner,” Brickhouse said.

Brickhouse estimates that the parachute system, manufactured by North Carolina-based BRS Aerospace, has saved “at least a couple of hundred lives” since its inception.

The Cirrus plane had a pilot and one passenger on board when the pilot deployed a red-and-white parachute and drifted down to a safe landing in a field near homes in Cherry Creek State Park, Arapahoe County sheriff’s Deputy John Bartmann said.

“Every one of these pilots needs to go buy a lottery ticket right now,” Bartmann said. “I don’t remember anything like this — especially everybody walking away. I mean that’s the amazing part of this.”

Frances Phillips was talking to her mother on the telephone and walking her dog in Cherry Creek State Park when she heard a big bang above her head. She looked up and saw one plane flying toward the airport and a smaller, red plane seemed to hesitate before turning toward her.

Phillips quickly hung up the phone without an explanation and ran off the path and through bushes to get out of the plane’s way. At first, she wondered whether it might be a large version of the remote-controlled planes that people fly nearby. But then she realized it was too big.

She reached the plane’s landing site just before police and saw two men standing in front of the plane, unharmed. The older of the two told police he was the pilot, she said.

“They’re just standing there like they’re at a cocktail party,” Phillips said.

Phillips’ friend Shelly Whitehead was getting coffee in her kitchen when she heard loud booms like firecrackers. When she ran to her back deck overlooking the park, she saw a plane falling and a parachute. She did not think anyone on board would survive.

“I was expecting an explosion but, when that didn’t happen, I was hopeful,” she said.

The National Transportation Safety Board has four people investigating the accident, the federal agency said in a statement.

“We are working to understand how and why these planes collided,” said John Brannen, lead NTSB investigator for the accident. “It is so fortunate that no one was injured in this collision.”

NTSB said it will publish a preliminary report in the next two weeks. But it expects the entire investigation to take 12 to 18 months.

The Independence-operated Cirrus had departed Centennial at 9:21 a.m. Wednesday, flew northward near Fort Collins and was returning to Centennial when the collision occurred.

Both Key Lime Air, a passenger and cargo charter company, and Independence Aviation, a flight school and aircraft rental firm that owns the Cirrus airplane, are based outside Centennial Airport, one of the busiest general aviation airports in Colorado.

Authorities did not immediately identify the people who were in the planes.

“At this time, we are allowing the NTSB and FAA to conduct their investigation,” said a statement issued by Derek Severns of the Cirrus Platinum Training Center, a pilot training center.

In 2016, a Key Lime Air charter plane on a nighttime flight from Panama City, Florida, to Albany, Georgia, crashed after possibly breaking up in midair as the lone pilot on board tried to navigate severe weather near Camilla, Georgia.

In 2001, a Key Lime Air flight crashed about 30 miles (48 kilometers) off the southern Colorado town of Pagosa Springs, killing two people on board.

In 2000, two pilots aboard a Key Lime Air Piper were killed after crashing near Kiowa, Colorado, southeast of Denver.