Enbridge has been warned that continuing to operate the line would be trespassing — and that the state would claim its profits. 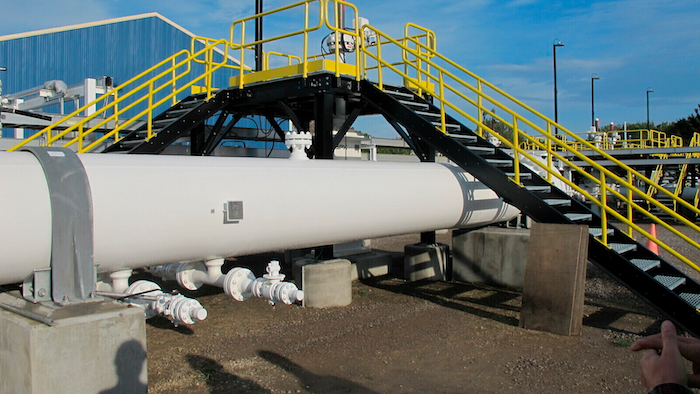 TRAVERSE CITY, Mich. (AP) — An Upper Midwestern oil pipeline continued operating Wednesday, despite a shutdown demand from Michigan Gov. Gretchen Whitmer that the operator warned could lead to fuel disruptions similar to those resulting from a cyberattack on an East Coast system.

Whitmer ordered Line 5 closed last November because of the potential for a spill in a channel linking two of the Great Lakes. As her May 12 deadline arrived, Canadian pipeline company Enbridge said only the federal government has regulatory authority over its operations.

Enbridge, backed by numerous chambers of commerce and Republican legislators in Michigan, seized on last week's hack of the Colonial Pipeline, which delivers about 45 percent of the gasoline consumed on the East Coast. The resulting shutdown led to panic-buying that has left thousands of filling stations without fuel and motorists in long lines.

"The cyberattack that triggered an unplanned, temporary closure brings to the forefront what consumers could face," said Mike Moeller, Enbridge's director of operations for the Great Lakes region. "Without Line 5, consumers will shoulder the burden of supply disruptions and related price increases, particularly for propane and transportation fuel."

Whitmer's office said in a statement that the Colonial Pipeline interruption "shows the danger of relying heavily on a single energy supply. That's why Governor Whitmer has put in place a plan to protect jobs, diversify and expand our renewable energy resources, and ensure Michigan's energy needs are met, while also taking action to get the oil out of the water as soon as possible."

Line 5 critics said previous shutdowns, including one last summer when a pipe support was damaged, caused no gasoline shortages or price gouging. Drawing connections to the Colonial Pipeline is "fraudulent and nothing more than a last-ditch effort to scare people," said Rich Bergmann, owner of Lake Charlevoix Brewing Co.

Line 5 moves oil and natural gas liquids for 645 miles (1,038 kilometers) through northern Wisconsin and Michigan to Sarnia, Ontario. The nearly 23 million gallons (87 million liters) it carries daily are refined for gasoline, jet fuel and propane in several Midwestern states, as well as Ontario and Quebec.

A roughly four-mile (6.4-kilometer) segment divides into two pipes that cross the Straits of Mackinac, which connects Lake Huron and Lake Michigan. The state in 1953 granted an easement to place the pipes on the straits bottom. Whitmer revoked it, saying Enbridge hadn't met its safety provisions, which the company disputes.

The state sued to enforce the order, which is pending as a federal judge considers whether to retain jurisdiction or send the case to a Michigan court. Whitmer warned the company Tuesday that continuing to operate the line would be trespassing and the state would claim Enbridge's profits from doing so.

Business groups filed a brief this week in support of Enbridge, saying a shutdown would have "tremendous consequences" for regional and national economies. They contend it would cost billions of dollars in economic activity and tens of thousands of jobs in the region. Christopher Guith, a senior vice president of the U.S. Chamber of Commerce, accused Whitmer of "political theater" and "pandering to the most extreme activists."

"Unfortunately, millions of Americans and Canadians are likely to pay the price for it," he said.

A forced shutdown also could give Enbridge legal cover to abandon its planned $500 million tunnel to house a replacement for the straits pipeline segment, said Valerie Brader, an attorney who filed the business groups' brief and formerly led the Michigan energy agency.

Environmentalists and native tribes planned rallies in Detroit, Lansing and the Straits of Mackinac area. They accused the company of flouting the law and endangering the world's largest freshwater system. "The scale and impact of a Line 5 oil spill would be an unprecedented ecological and economic disaster," said Liz Kirkwood, executive director of Traverse City-based For Love of Water.