The 10-minute flight tested new technology that could help put astronauts back on the moon. 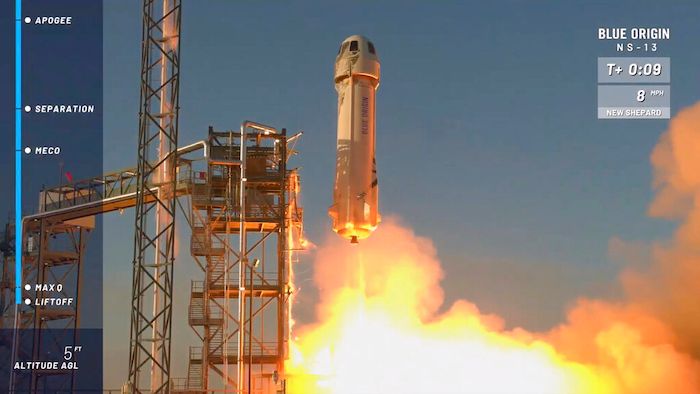 In this image from video made available by Blue Origin, the New Shepard rocket lifts off from its launchpad in Texas, to test new lunar-landing technology for NASA that could help put astronauts back on the moon by 2024.
Associated Press

CAPE CANAVERAL, Fla. (AP) — Jeff Bezos’ Blue Origin space company launched a New Shepard rocket for a seventh time from a remote corner of Texas on Tuesday, testing new lunar-landing technology for NASA that could help put astronauts back on the moon.

The entire flight — barely skimming space with a peak altitude of 66 miles (106 kilometers) — lasted just 10 minutes. The booster landed vertically back at the launch complex after liftoff, and the capsule followed, parachuting onto the desert floor.

The capsule carried science experiments, including 1.2 million tomato seeds that will be distributed to schoolchildren around the U.S. and Canada, and tens of thousands of children’s postcards with space-themed drawings that will be returned to the young senders.

NASA’s navigation equipment for future moon landings was located on the booster. The sensors and computer — tested during the booster’s descent and touchdown — will hitch another suborbital ride with Blue Origin. It's all part of NASA's Artemis program, which aims to put the first woman and next man on the moon by 2024, a deadline imposed by the White House.

"Using New Shepard to simulate landing on the Moon is an exciting precursor to what the Artemis program will bring to America,” Blue Origin's chief executive Bob Smith said in a statement.

Texas-based Southwest Research Institute had a magnetic asteroid-sampling experiment on board, as well as a mini rocket-fueling test.

Led by Amazon founder Bezos, Washington state-based Blue Origin is leading a team of companies to develop a lunar lander for astronauts. Elon Musk’s SpaceX is also working on a lander, as is Alabama-based Dynetics. NASA chose three teams in this early phase of the Artemis moon-landing program to increase the chances of getting astronauts to the lunar surface by the end of 2024.

Delayed three weeks by technical issues, this was the 13th New Shepard flight for Blue Origin. The first was in 2015. The rocket is named for the first American in space, Alan Shepard.

Tuesday’s launch was the first in nearly a year for Blue Origin: The pandemic stalled operations. Blue Origin said its staff is maintaining social distancing and taking other safety measures.

Blue Origin said it needs a couple more flights before launching people — tourists, scientists and professional astronauts — on short hops. The capsule has six seats and six windows, the biggest to fly in space.