China has at least four coronavirus vaccine candidates in the last stage of clinical trials. 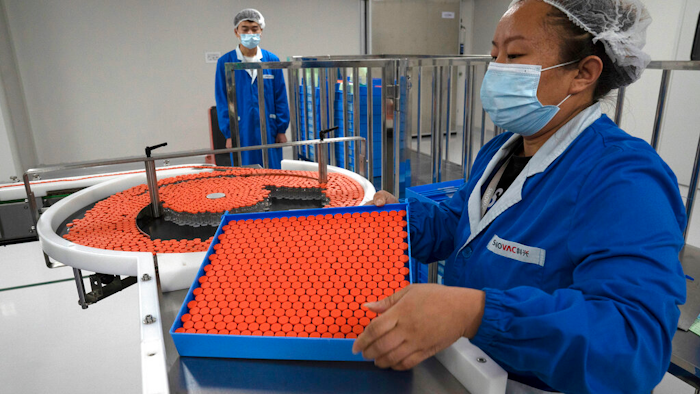 TAIPEI, Taiwan (AP) — China, which has at least four coronavirus vaccine candidates in the last stage of clinical trials, said Friday it is joining an international initiative to distribute COVID-19 vaccines to countries worldwide known as COVAX, a move that may help the country find an international market for its coronavirus shots.

The country signed an agreement with Gavi, the co-leader of the project, on Thursday, China's foreign ministry said. Initially, China did not agree to join the alliance, after missing an early deadline to join in September.

“We are taking this concrete step to ensure equitable distribution of vaccines, especially to developing countries, and hope more capable countries will also join and support COVAX," ministry spokeswoman Hua Chunying said in a statement. She added later at a daily news briefing that many Chinese vaccine companies expressed a willingness to join the partnership and that China would buy vaccines for about 1% of its population through COVAX.

The exact terms of the agreement and how China will contribute are not yet clear. Countries can choose to buy vaccines to cover up to 50% of their population but many developed countries are using COVAX as a type of insurance policy to obtain extra doses on top of any bilateral deals signed with pharmaceutical companies.

Chinese leader Xi Jinping previously said the country would make the vaccine a global public good and would distribute its shots in Africa — but only after China's own immunization program had been completed.

The World Health Organization, which also leads COVAX, welcomed the announcement, saying in a statement that “the number of countries joining the COVAX facility grows every day, and we are pleased to see China formally join.”

The initiative is designed so that richer countries agree to buy into potential vaccines and help finance access for poorer ones, but critical questions remain about how its goal will be carried out. Many countries including Britain, the U.S., France, Germany, and others have directly negotiated their own deals with pharmaceutical companies to receive billions of doses, meaning that the vast majority of the world's vaccine supply next year is already reserved.

Some experts point out that without significant efforts to quickly boost manufacturing capacity globally, Chinese vaccine producers may offer the best chance to supply the developing world. China's decision to join COVAX might give the country an opportunity to sign multimillion dollar deals that Gavi and partners will need to enter to secure billions of vaccine doses.

The United States, the world's largest economy, declined to join under President Donald Trump, saying COVAX was “influenced by the corrupt WHO and China.” China has the second-largest economy in the world.

“China joining COVAX serves a dual purpose of filling the leadership vacuum left by the United States in terms of global public health, and in terms of securing a future vaccine for its population,” said Natasha Kassam, a research fellow at the Lowy Institute in Australia.

A successful vaccine candidate from China could help it repair its reputation abroad. A recent survey conducted by the Pew Research Center found that negative views of China have risen sharply in 2020 in some countries. Views in democratic countries have hardened after the coronavirus outbreak was first discovered in the central Chinese city of Wuhan, and a majority of respondents said China handled the outbreak poorly. Many criticized China for obfuscating early reports of COVID-19.

China has been eager to reshape the narrative, calling the virus a common challenge facing humanity, and even questioning its origin. Earlier, as the pandemic spread around the world, it sent medical teams and supplies to affected countries. More recently, it has signed agreements with developing nations such as Indonesia and the Philippines to provide priority access to one of its vaccine candidates and offered a $1 billion loan to countries in Latin America.

What remains to be seen is how China will engage with the alliance, said Dr. Gagandeep Kang, the vice chair of the Board of the Coalition for Epidemic Preparedness Innovations, or CEPI, which is also involved in leading COVAX. Most countries are entering COVAX to try to get access to vaccines that aren’t being manufactured domestically, she said.

China could be trying to ensure that the vaccines it is developing find a global platform. “For China it could be across the spectrum. To have their vaccines participate in the provision of vaccines (to other countries), and for access to vaccines,” said Kang, who is also a microbiologist at the Christian Medical College in the Indian city of Vellore.

Chinese pharmaceutical company Sinovac, for example, recently said it wants to provide its vaccine to the world, including the U.S. and countries in Europe with stringent regulations that have prevented previous Chinese vaccines from being sold.

COVAX plans to buy 2 billion doses of a vaccine by the end of 2021, although it remains unknown whether the successful vaccine will require one or two doses.

To date, China has not yet published any late-stage information about any of its vaccine candidates, despite starting to use some more broadly in targeted populations. Without that data, it is unclear how safe and effective any of the experimental Chinese vaccines are.