He's disappointed that the company's work is being politicized and reassured staff that he won’t bend to pressure to move more quickly. 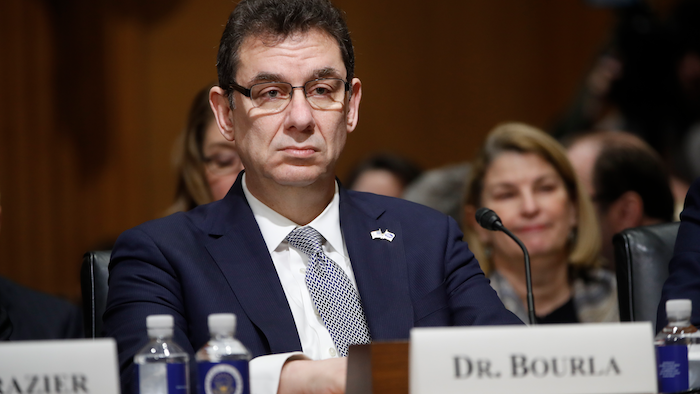 In this Tuesday, Feb. 26, 2019 file photo, Albert Bourla, chief executive officer of Pfizer, prepares to testify before the Senate Finance Committee hearing on drug prices, on Capitol Hill in Washington. On Thursday, Oct. 1, 2020, Bourla wrote to Pfizer employees that he's “disappointed” the timing for a vaccine to be available was politicized during Tuesday night’s presidential debate, saying the company won’t succumb to political pressure.
AP Photo/Pablo Martinez Monsivais

The head of Pfizer, one of the drugmakers racing to develop a coronavirus vaccine, told employees on Thursday he was disappointed that its work was politicized during the presidential debate and tried to reassure U.S. staff that the company won’t bend to pressure to move more quickly.

CEO Albert Bourla told the employees that the company is “moving at the speed of science,” rather than under any political timing, according to a staff letter obtained by The Associated Press.

“The only pressure we feel — and it weighs heavy — are the billions of people, millions of businesses and hundreds of government officials that are depending on us,” Bourla wrote.

Despite top U.S. federal health officials repeatedly stating that a vaccine is unlikely to be available widely until mid-2021, President Donald Trump has insisted that a vaccine will be ready before Election Day.

During Tuesday's debate with former Vice President Joe Biden, Trump said he had talked with the companies whose experimental vaccines are furthest along in testing.

“I’ve spoken to Pfizer, I’ve spoken to all of the people that you have to speak to, Moderna, Johnson & Johnson, and others. They can go faster than that by a lot,” Trump claimed. “It’s become very political.”

“We’re weeks away from a vaccine,” Trump added.

Pfizer has said that by late October it expects to have data from its ongoing late-stage test that could show whether the vaccine is safe and effective. In his letter to employees, Bourla wrote that the company hopes to have “a hundred million doses delivered by the end of the year.”

Those doses could not be distributed until the Food and Drug Administration reviews Pfizer’s data and decides whether to issue what’s called an emergency use authorization. That would allow distribution of the vaccine on a limited basis, with initial shots expected to go to medical and other frontline workers, nursing homes and people most at risk of catching or becoming seriously ill from the virus.

That's if the vaccine works. Boula conceded that's still unknown, and in the meantime the political rhetoric is undermining public confidence in the process.

“I can’t predict exactly when, or even if our vaccine will be approved by the FDA for distribution to the public. But I do know that the world will be safer if we stop talking about the vaccines’ delivery in political terms," he wrote.

People “don’t know whom or what to believe,” he wrote.

“Any new vaccine must meet the FDA’s rigorous standard for quality, safety, and efficacy and will be verified by independent experts. The Administration is sparing no effort or expense to save millions of lives,” Bars said in a statement.

Moderna's experimental vaccine, which is also in late-stage trials, will not be ready to seek emergency authorization from the FDA before at least Nov. 25, Moderna CEO Stéphane Bancel told the UK’s Financial Times on Wednesday.

And AstraZeneca, which has a candidate in late-stage trials in other countries, has had to put its U.S. study on hold while the FDA reviews a possible safety problem.

Bourla and top executives of eight other companies developing COVID-19 vaccines and treatments pledged in early September not to seek even emergency use authorization, let alone a full approval of their products, until they were proven safe and effective.